Rogue Heist is an action third-person shooter developed by Lifelike Studios and published by Time2Play Gaming Studios. The game was released on August 21, 2019 as an early access title on Steam.

Rogue Heist is a competitive third-person shooter set in a world of organized crime. The game is designed to promote teamwork between players in order to complete objectives. Factions are represented as Crews, with each player given a designed Role to play in a match. Experience points are awarded based on a team's heist ratings and a player's performance. The game also features periodic events and challenges for players to complete.

Each player may select between either the Recruit or Specialists. Recruits may be customized based on their selected Crew. Skill points may be used to improve the health and speed of a Recruit and are obtained through gameplay. Specialists, unlike Recruits, offer specialized abilities and unique looks. They may be obtained through Cash or Encrypto.

Each character has a dedicated role to fullfill: Assault, Sniper, Support, and Hacker.

Several cosmetic customization options are available in Rogue Heist. Weapon Skins and Character Skins may be purchased with Cash or Encrypto in the Black Market and Armory. They may also be obtained from Heist Crates which are awarded through gameplay. Other customization options such as emotes will become available at a later date. Cosmetics come in three rarities: Common, Rare, and Legendary. They offer no gameplay advantages and are purely aesthetic. 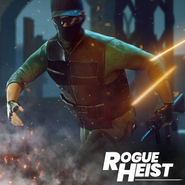 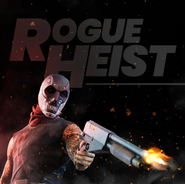 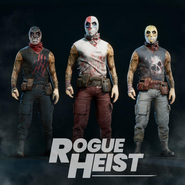